What is tabla’s best friend? “The Hammer,” according to David Yovino, who launched a Kickstarter Campaign http://kck.st/WiuStF to advance the design of tabla. “Without the hammer, a tabla player cannot tune their instrument. Tabla players must develop sensitivity with their hammer, striking carefully and accurately. Otherwise, the tabla can be damaged or the player may take too long to tune and ruin the mood of a concert. I wanted to evolve the design to create a more comfortable and useful hammer.” 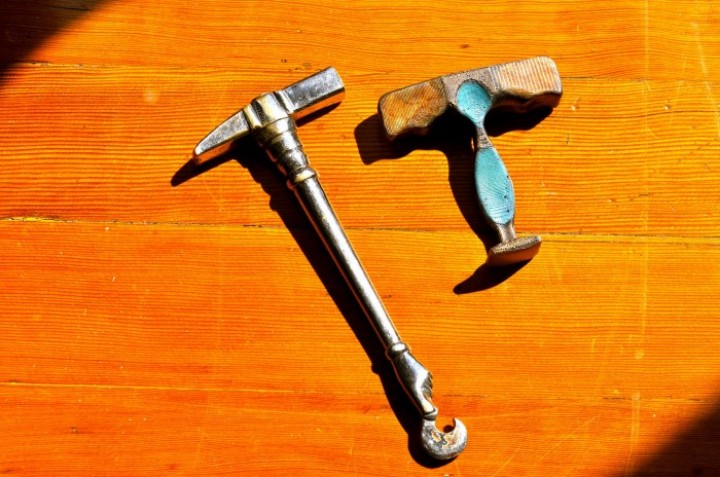 The evolution of the tabla hammer: old skool (left) and the future (right)

It makes sense: even tabla, which has withstood the test of time, is due for innovation.

Like all musical instruments, tabla has undergone changes in its design that parallel advances in technology as well as the changing tastes and demands of audiences over centuries of time. The need for more speed, interplay and improved sound have resulted in what we see on stage today. The drum, in just one hundred years, has evolved a great deal from its origins and from its parent drum, the Pakhawaj. That drum was the favorite of the Mughuls in Delhi up to the 1500s. But as tabla artists fled eastward to Lucknow and Kolkata as a result of the onslaught of the British from the 1700s onwards, tabla too had to change as the structure and presentation of ragas changed. Growing middle class and global audiences demanded more fireworks from their tabla players, more speed, and a more powerful sound. 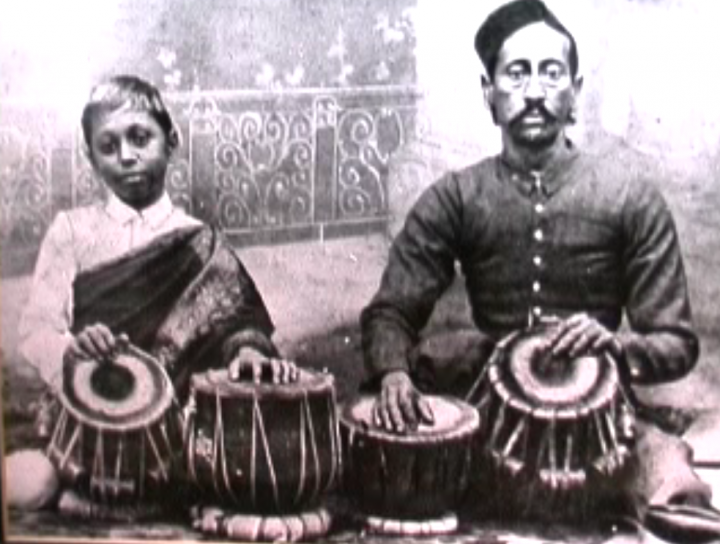 1920 Kolkata – Pandit Hirubabu Ganguly (left) and Ustad Abid Hussain Khansahib (right). Notice the size of the baya, the bass drum, and the larger size of the tabla.

Just one hundred years ago, tabla would have looked much different than it does today. In those times, the baya may have been more likely made of clay, not steel, like today. Although the clay was more resonant in sound, the baya unfortunately couldn’t travel well and was extremely fragile. The bass drum was smaller and also often positioned in the lap of the player, rather than on a ring on the floor, so it too was smaller. Tabla was still very sheltered, and heard only by the elite audiences lucky enough to have presence in the court of the Rulers. It simply was not designed to be consumed on a mass scale, and as such the drums were smaller overall, and designed to project to audiences in small rooms, perhaps for just 50 or so audience members.

That all changed with the arrival of the microphone in India in the early 20th century, the collapse of the Mughal system of patronage, and Indian / Pakistani independence in 1947. Tabla was liberated from its small environs, and within a few decades after independence was being mic’ed and projected to large audiences across India and south Asia. Tabla players were being invited by burgeoning Bollywood composers in Mumbai to perform on film scores. The sound of tabla was going global. All the traveling and the availability of mics led to tabla shrinking in size and the incorporation of new and more durable materials like steel for the baya shell, versus clay. The increasing popularity of the instrument resulted in the explosive manufacture of drums of varying quality by tabla makers in villages and cities across north India. As demand increased, quality and innovation decreased.

Even today, getting good tabla manufactured outside of India is a near impossibility. Only a handful of tabla makers based in India deliver the best drums to master and advanced players worldwide.

Fast forward to 2012. David Yovino, a student of tabla maestro Pandit Swapan Chaudhuri at the Ali Akbar College of Music in San Rafael, California, is applying his skills in design, architecture and music to rethink tabla from the ground up. His designs are addressing critical questions that have been largely unaddressed by tabla makers for decades: How can the latest advances in materials be integrated into the design of tabla? How can tabla be redesigned to facilitate easier collaboration with non-Indian classical musicians? How do you maintain tuning of the drum while enduring the rigors of traveling? How can you enable fast tuning of the drum beyond just a half step up or down? How do you increase the resonance of the drum’s sound?

Yovino has created the first ever mechanism that enables simple tuning of tabla beyond just a half step. Tabla players who want to collaborate with western musicians often have to carry 2 or more drums that are in tune with the pieces being performed. Now, tabla players can simply adjust the tuning of a single drum across whole steps up or down the scale, while maintaining the drum’s balance. A machined hole built into this new design called the TransTabla allows for easy mounting of the drums on stands, so tabla players can more easily stand up with fellow musicians and perform on stage. Kevlar threading in the straps keeps the drum in tune almost indefinitely.

A new Tabla Tool he designed represents the evolution of the traditional hammer. Incorporating ergonomics and a hook for strap adjustment, the new hammer is more balanced and more utilitarian. Advances in the finishing of the metal also improve its aesthetic appeal.

← The Body Mechanics of Playing Tabla
The Future of Tabla Design: Transtabla – Part 2 →